It’s 2.07pm.  Have done my Body Scan Meditation but can’t sleep so am sipping lemon squash with fizzy water and listening to The Kinks whilst I write this.

Arrive with New Chap at the airport last night before Bag Drop is even open.  So we have a coffee and wait.  At long last Bag Drop opens and make it through security and settle down to read Jenn Ashworth’s Fell which is wonderful.  Heartily recommend it: brilliant atmospheric writing.

Flight is an hour late taking off last night so don’t arrive back at the parentals till two o’clock in the morning.  When I walk to my bedroom my fluffy monster is sleeping on a chair in the playroom, guarding my room.  Stroke him as I pass by, being careful not to wake him.

Wake up this morning at 8.50am and photograph Mum’s poppies: 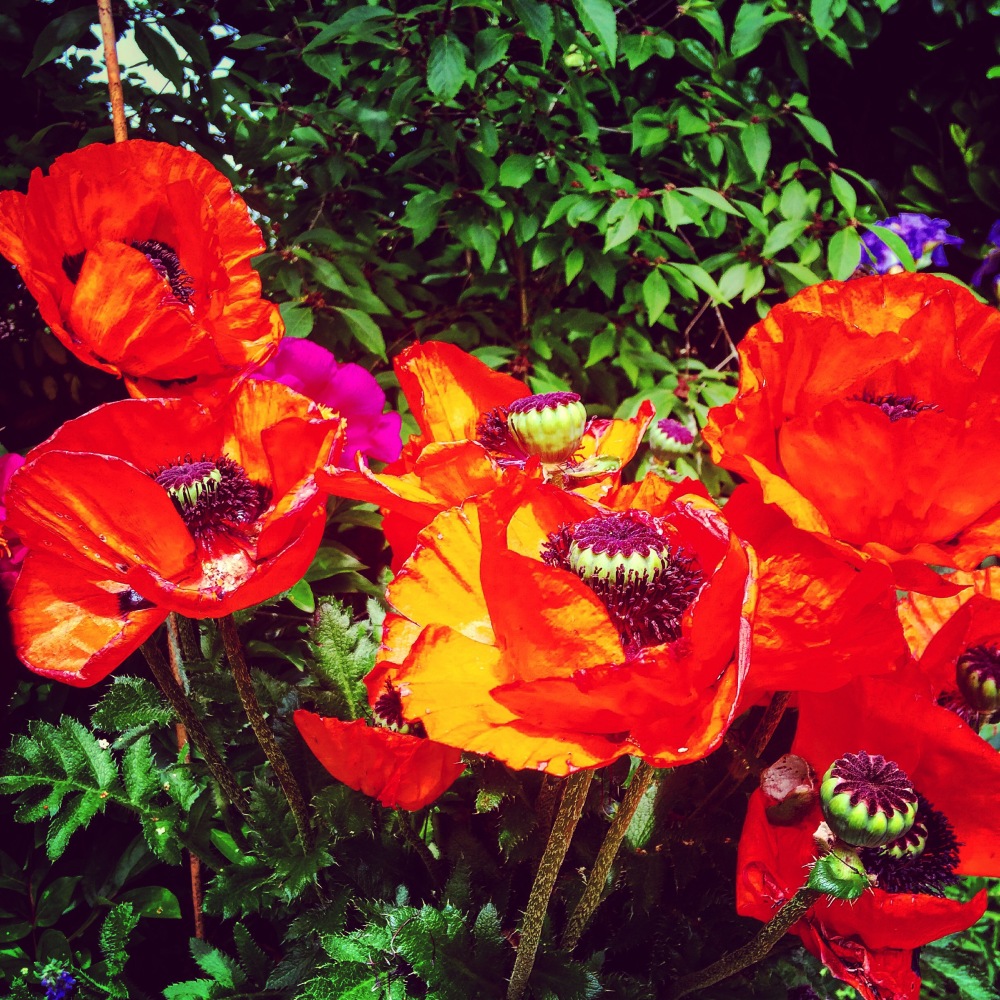 This plant is Black elder I think:

Walk into the village this morning to purchase protein bars and to book a haircut.  Can’t remember when last had a haircut.  It’s taking place at 4.15pm so will walk down there.  The weather is warm but humid.

Have already booked next trip to see New Chap which will be after Queens and Wimbledon from 20th to 25th July.

Email the Schwinn Cycling people to see if can delay Bronze Certificate Course.  Have Operation to insert port on Monday and it may well take a bit of recovering from, could become infected etc.  My Instructors don’t think I’m ready for the course. Really hope that can delay it.

The attached photo is New Chap at a cafe yesterday.  Miss him already.

Right am going to watch some French Open tennis.

Happy Wednesday everyone!
*1968.  Single by The Kinks released as the B-side of Days.  Written and produced by Ray Davies.  Appears in 1972 on The Kink Kronikles compilation album.

I’m sitting up in bed writing this.  It’s 3.24pm and it’s another beautiful day of sunshine and blue skies here.

Have achieved a shower and have even packed suitcase.  Well done me.

Here we are at lunch today: 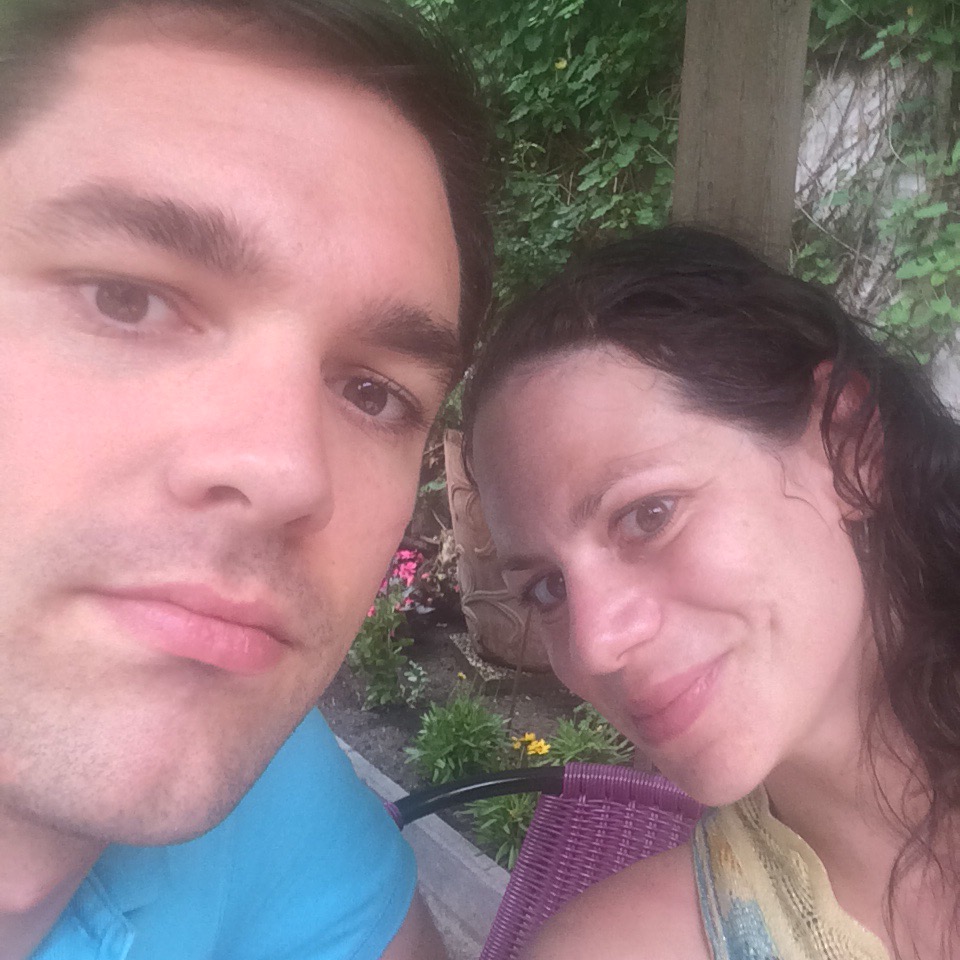 These stones in the pavement commemorate Jewish people who were deported and died in the camps: 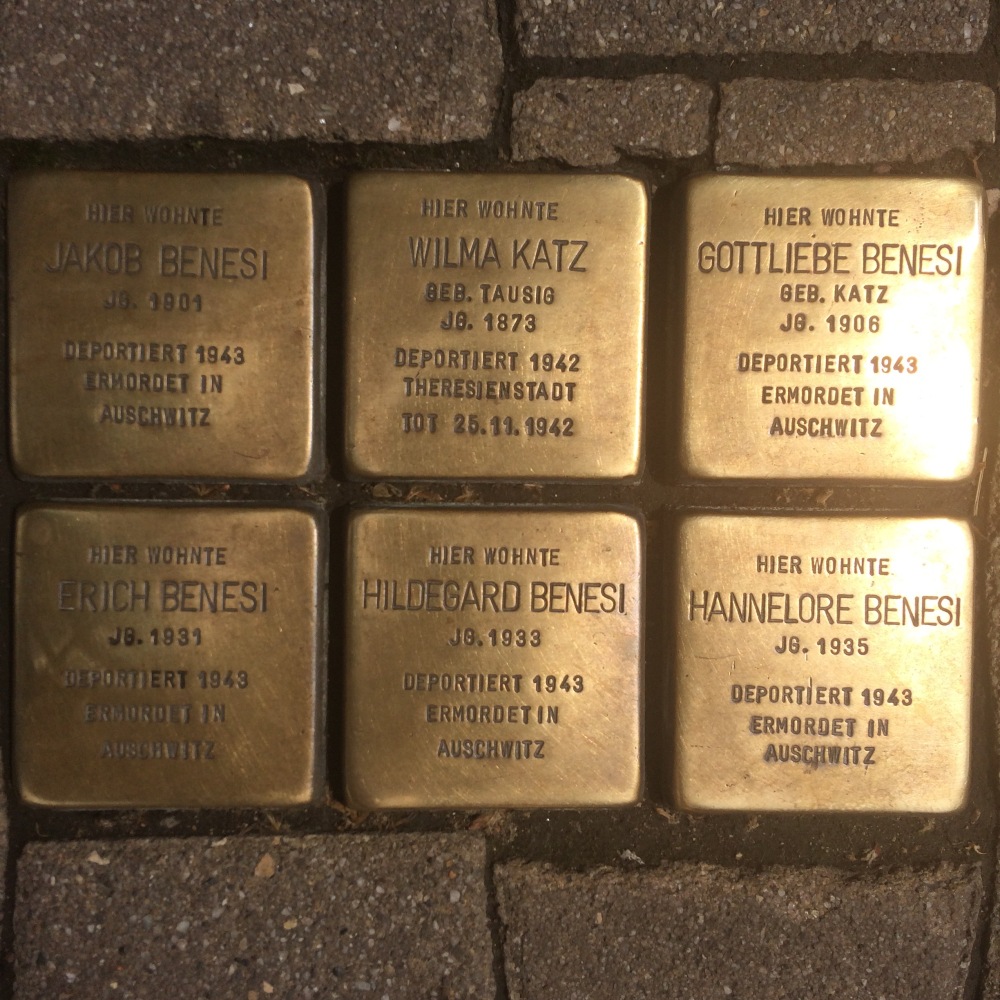 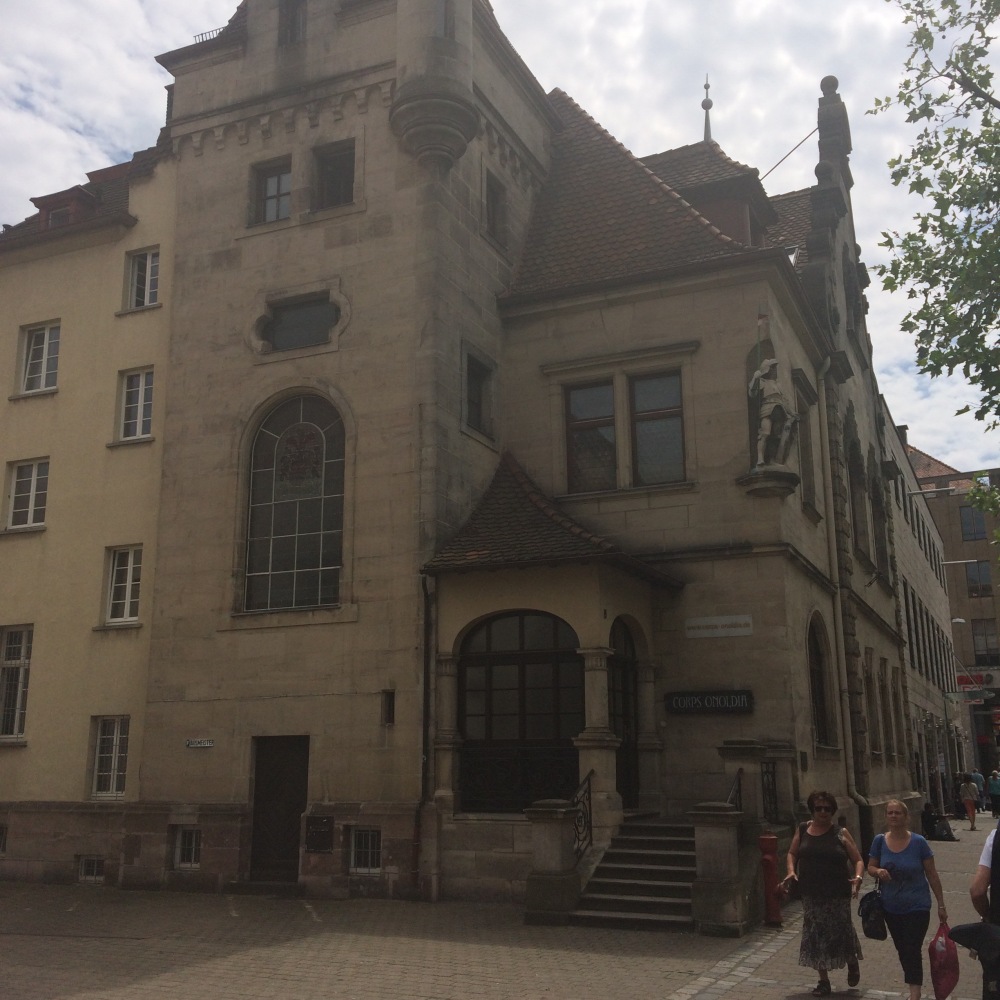 Here we are in the main square in Nuremberg.  If you turn a ring on this well it brings good luck.  So I do.

We visit Albrecht Durer’s House, which is wonderful.  They give me an engraving of the rhino for free and I purchase little pictures of Young Hare and an owl.

Yesterday in Nuremberg we visit the place where they held the Nazi Rallies and this lake.  The red building is the Congress Hall.

Here is a coot on her nest on the lake:

We have coffee overlooking the lake:

We climb up the Zeppelin Field to the stage where Hitler gave his speeches at the Nuremberg Rallies.  Now they have rock concerts there.  So much for the Thousand Year Reich.

Last night we watch The Discovery Of Heaven which is great.  Recommend it.  We also watch The Triumph Of The Will, which is of course filmed in 1935 at the Nuremberg Rally.

Am flying late this evening so am going to spend my last few hours with my New Chap.  I really don’t want to go home and leave him.

We’re off to Nuremberg today so just scribbling this first.  It’s 8.27am and it’s sunny and will be hot so will wear a dress and plenty of sun cream.  The Durer House is closed so we will do Other Activities.

Here we are yesterday at supper: 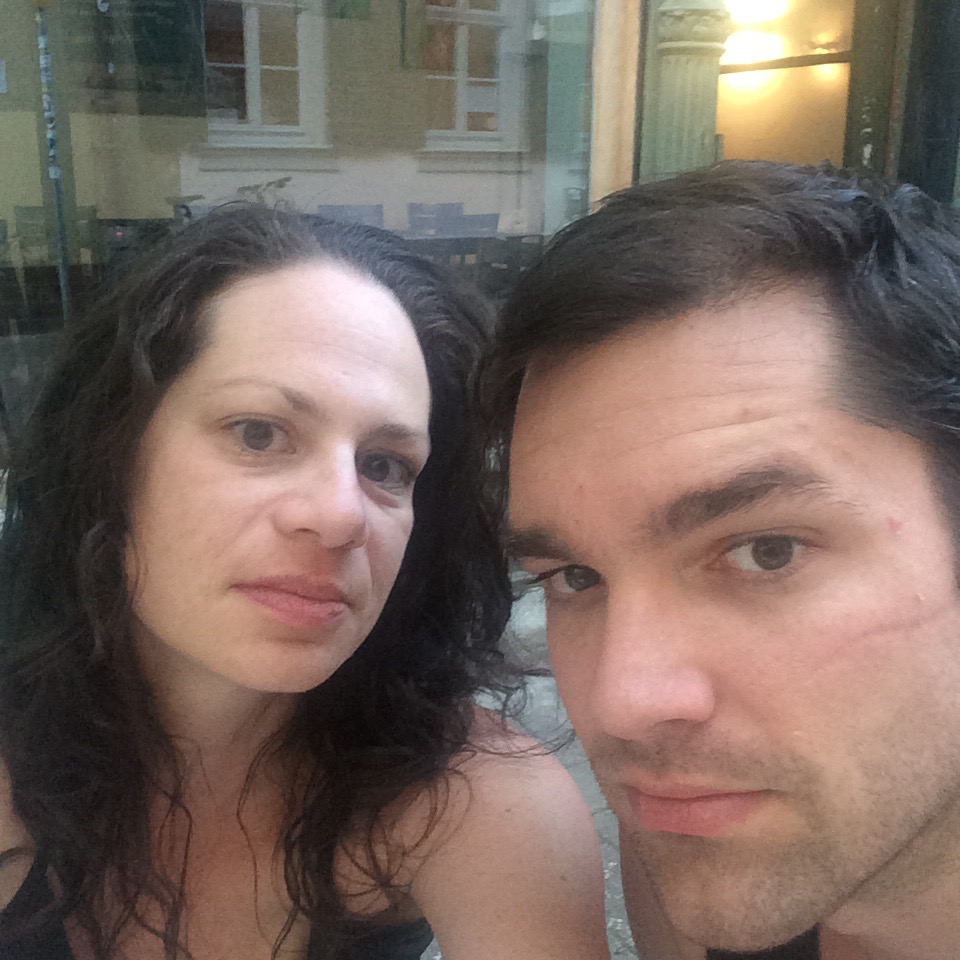 As you can see we sit outside.  Again.  I love Abroad.

The fan is on.  We’re listening to The Kinks.  The malamute has returned to her Mum so we miss her.  Nothing is left of her except white fluff on the hall carpet.

New Chap makes me scrambled eggs and coffee for breakfast.  Am drinking lemon squash and lying on the bed writing this whilst he hangs up the washing and puts on another wash.

Am so happy here and having a lovely time.  We spend yesterday afternoon in the park.  That morning we take the malamute for a walk.  She is such a fluffy beauty and so gentle.  Her gait is great for a fourteen year old person.  She doesn’t seem to have arthritis or anything like that.  She is very well loved and cared for by her humans.

Happy Monday everyone!
*1972.  Song by The Kinks.  Written and produced by Ray Davies.  Appears on the album Everybody’s In Show-Biz.  Released as the B side of the Sweet Lady Genevieve single.

It’s Hot today so we leave the house just after 9am to walk the beautiful malamute.  We wander through the park listening to The Kinks.  We encounter red squirrels and she chases one.  He runs up a tree so she doesn’t catch him.  Don’t think have ever seen a wild red squirrel before so it’s such a treat for me.

The sky is blue.  Swifts circle and screech above us.

On our return we have breakfast and cuddle her in the house.  Here she is: 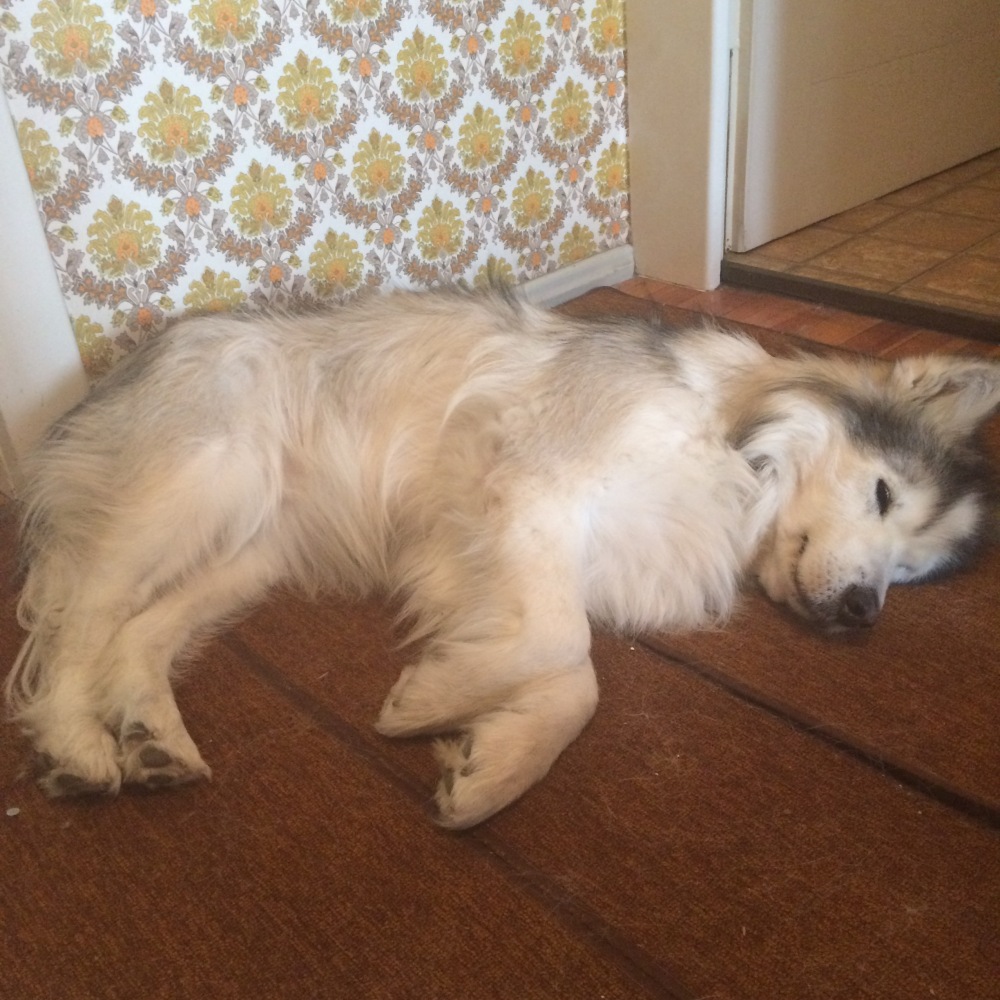 She is the most beautiful and amazing person and in fine fettle for a thirteen year old large dog: her movement is fluid and she is still curious about the world and engages with it.  I love her.

Here we are at a restaurant having lunch outside: 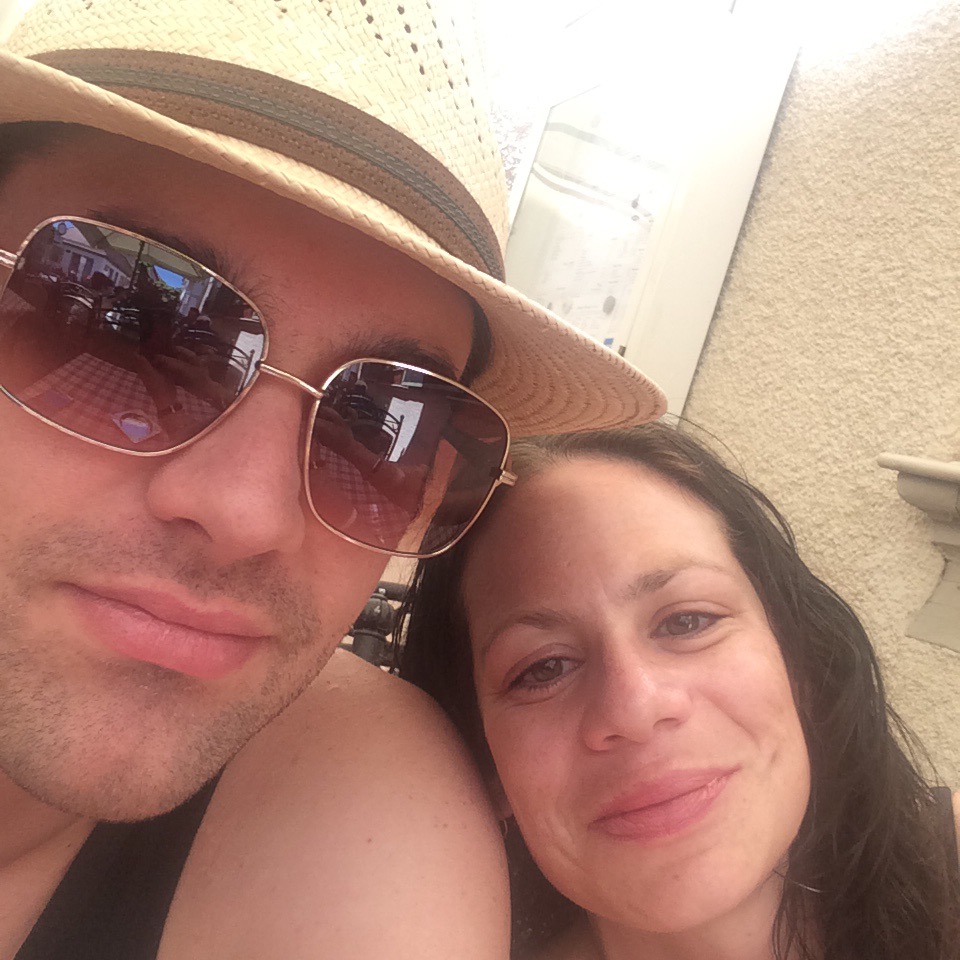 I have Spaghetti Pomodoro, a large salad and a Diet Coke.  We down a litre of San Pellegrino between us.

More photos of the most beautiful dog in the world: 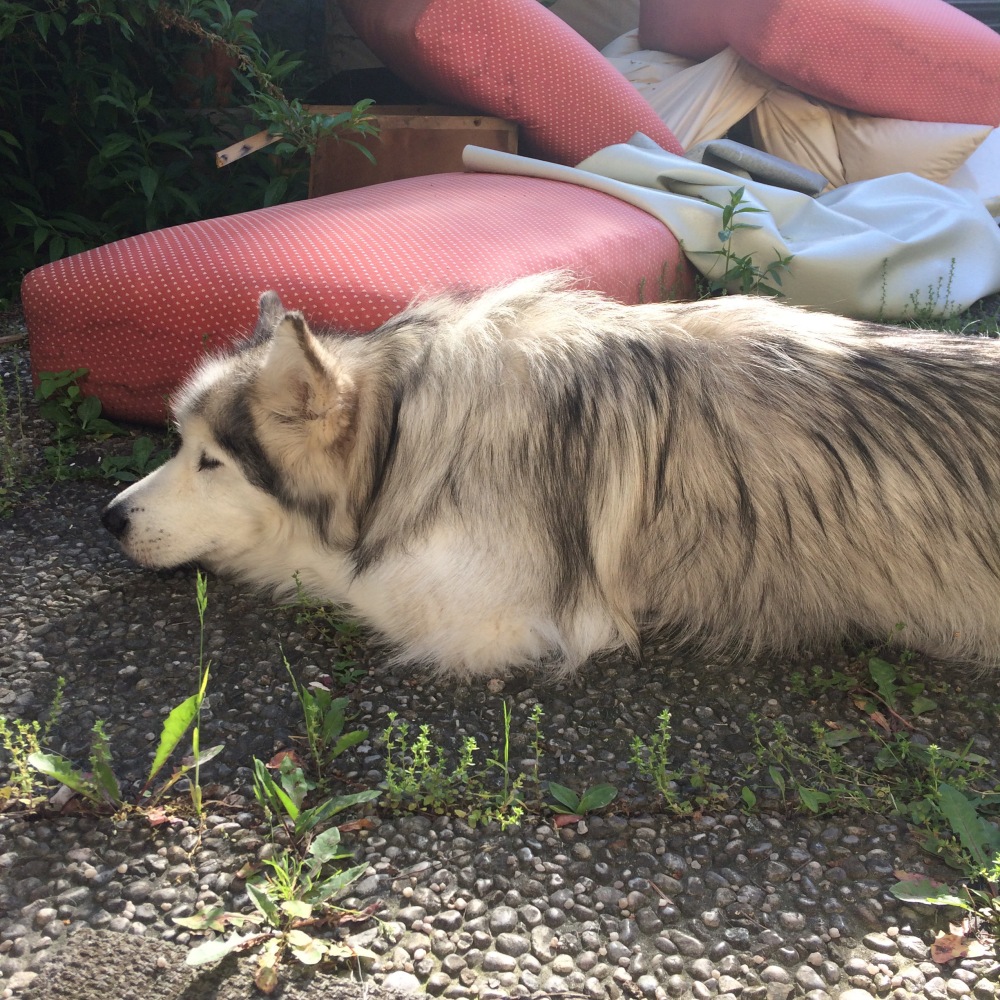 New Chap leaves the house at 8.40am this morning to pick up his dog.  Then we visit the Botanic Garden which is beautiful.  There is a pond with koi so we have to stop the dog from catching one.  She has to walk in front of us as she’s pack leader.  Also she does a lot of scent marking everywhere.  Here we are: 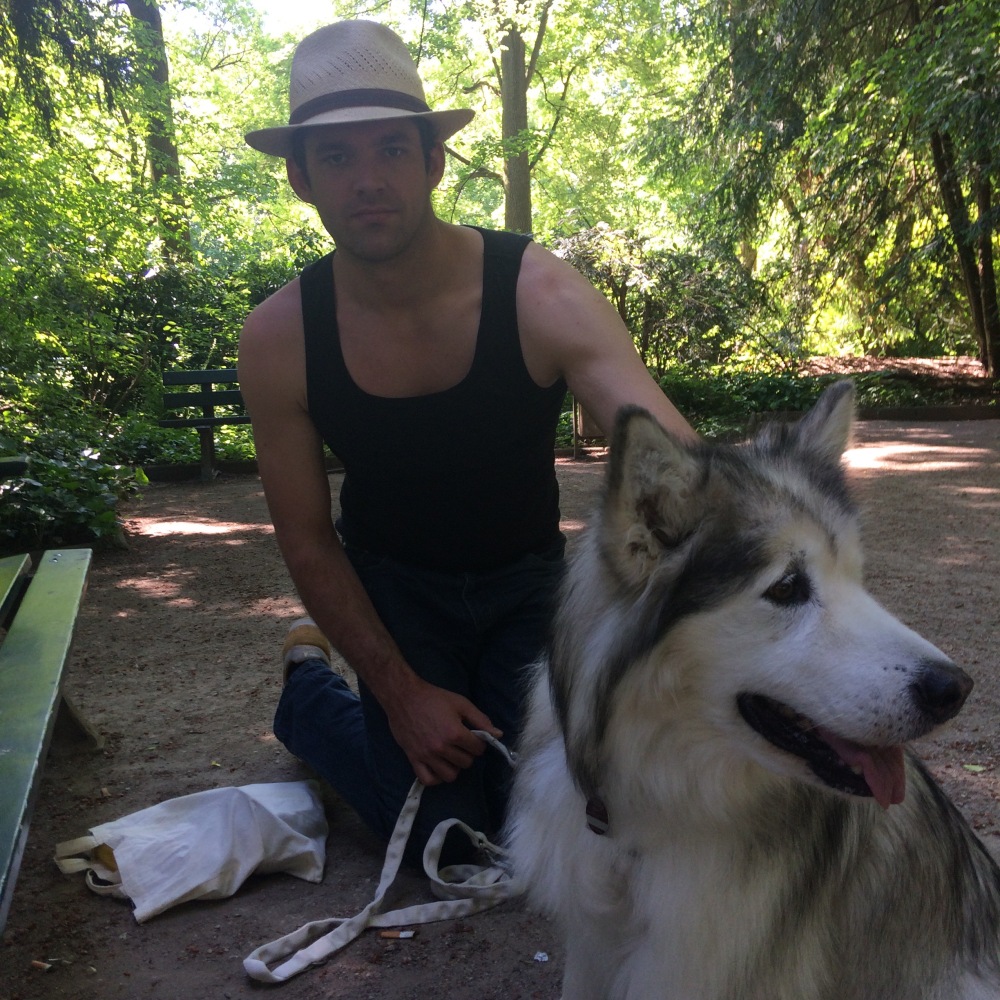 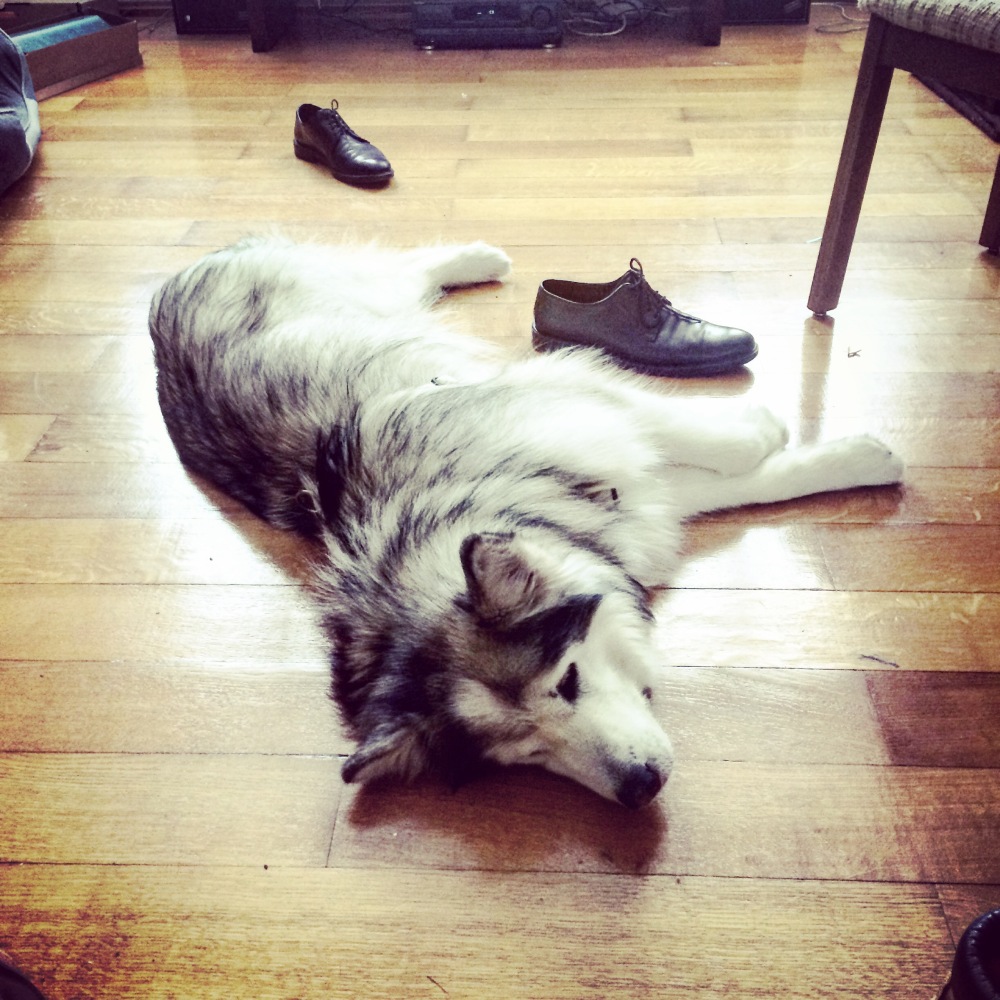 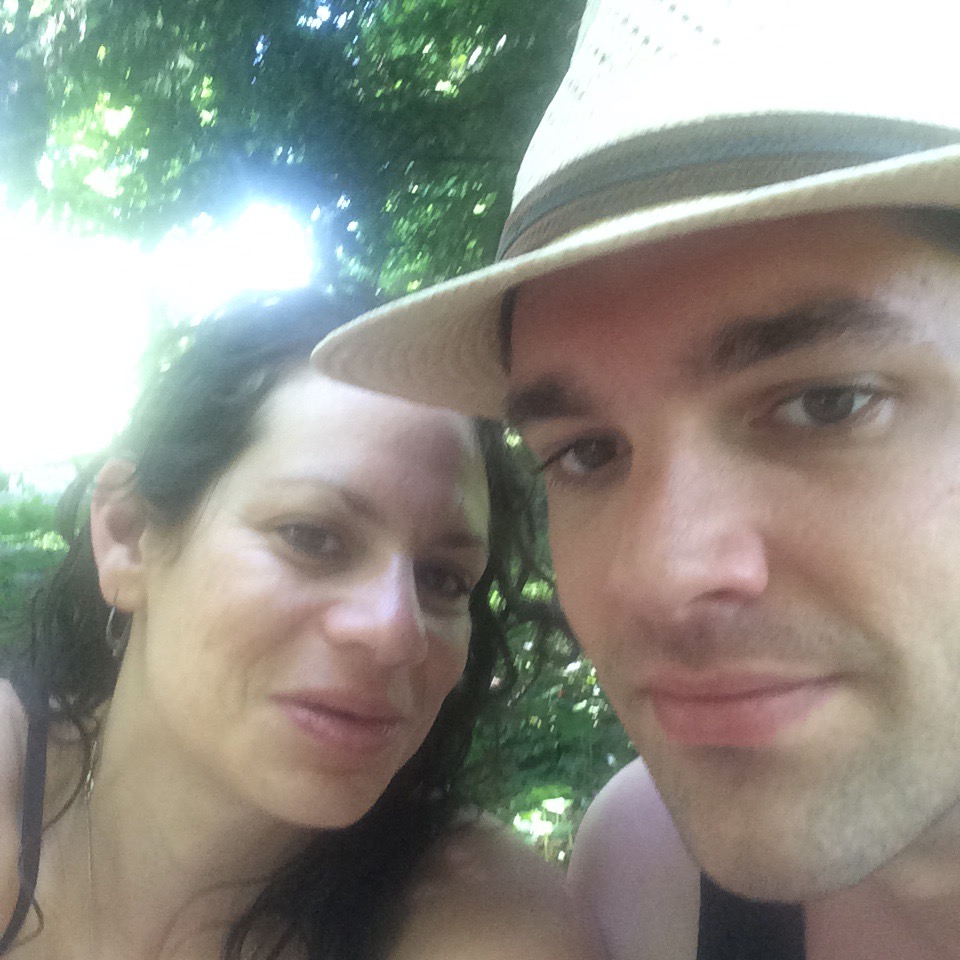 We return to the house after our walk to listen to Leonard Cohen and chat and play with the queen of malamutes.  She is so amazing.

This afternoon we go out for coffee opposite this bike shop:

New Chap buys some shorts and a pair of sunglasses.

This is our breakfast this morning at a cafe.  It is nice: 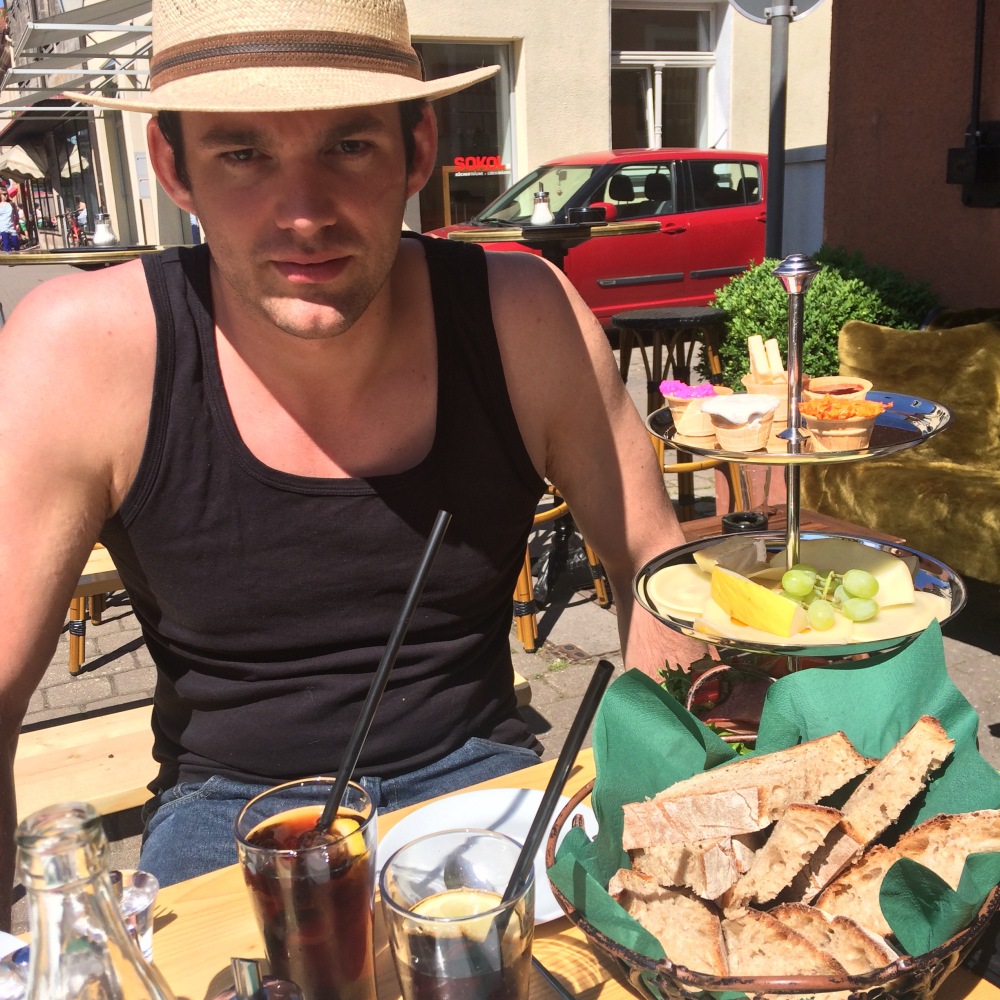 It’s 4.44pm.  We’ve returned to the house to cuddle the wonderful dog person.  She is collapsed in the hall where it’s cool.  She is a sled dog so this weather is very hot for her.

We purchase Gone Girl at the DVD shop so we plan to watch that and make some supper.

Am having a wonderful time with my chap.  He is making me an omelette with feta.

Happy Saturday everyone!
*1990.  By Susan Conant.  A Dog Lover’s Mystery Book 1.  When a dog owner is murdered a training session, Holly Winter uses the victim’s big malamute to find the killer.

So, this morning we go to the cafe opposite the house for breakfast.  It’s hot and sunny and we sit outside.  Here we are in our hats:

I have an omelette and New Chap has scrambled eggs with bread and goat cheese.  It’s so lovely to be sitting outside with my boy.

Then we go to the whole food shop to stock up on vegetarian delicacies. We also buy a fan and I purchase a small bottle of Chanel’s Coco Mademoiselle which is the only perfume I wear.

We have also been sitting outside on the terrace drinking this grapefruit flavoured sugar free fizzy drink:

Last night we attend a local Italian restaurant and I wear my Missoni dress.  Show you:

Eat Spaghetti Pomodoro and it’s So Good that it’s warm enough to sit outside in the evening.

Here are a couple of the bookshelves in the house.  It’s my kind of house: full of books.

We’ve just watched The Lives Of Others which is excellent.  Urge you to watch it.

Now we are lying on the bed.  Am writing this and New Chap is fiddling with his phone.  We are getting on So Well: am having a wonderful time 😍.  Am so happy that we are enjoying each other’s company so much.

I am in Abroad so this is just a quick one to let you all know that have arrived and am having lovely time.

New Chap has popped out to get food.  We have been sunbathing in the park.  It is lovely here.

The attached photo is the fluffy monster yesterday.

Happy Thursday everyone!
*1968.  Single by The Kinks.  Written and produced by Ray Davies.

Am sitting in the garden.  The fluffy monster is resting in the herb bed.  Here he is earlier today:

Here is one of the Night Sky petunias that Mum has planted in the wall: 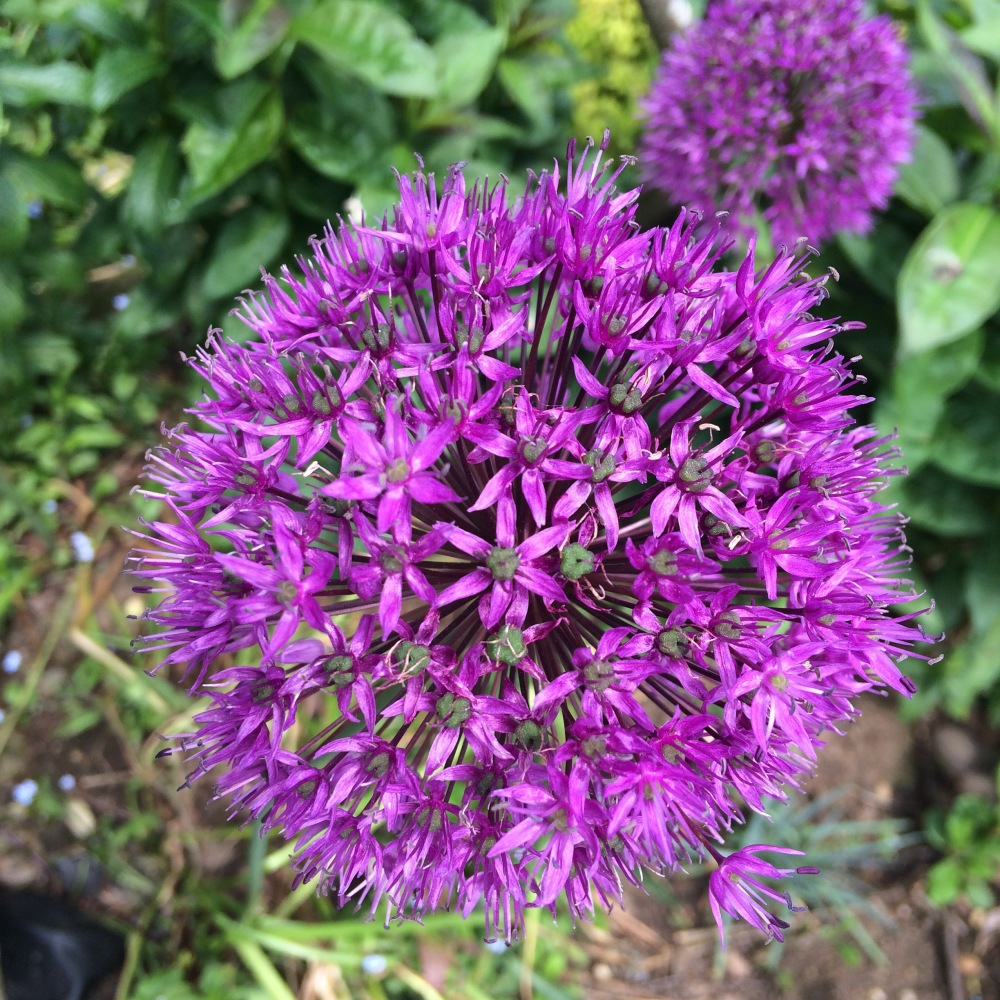 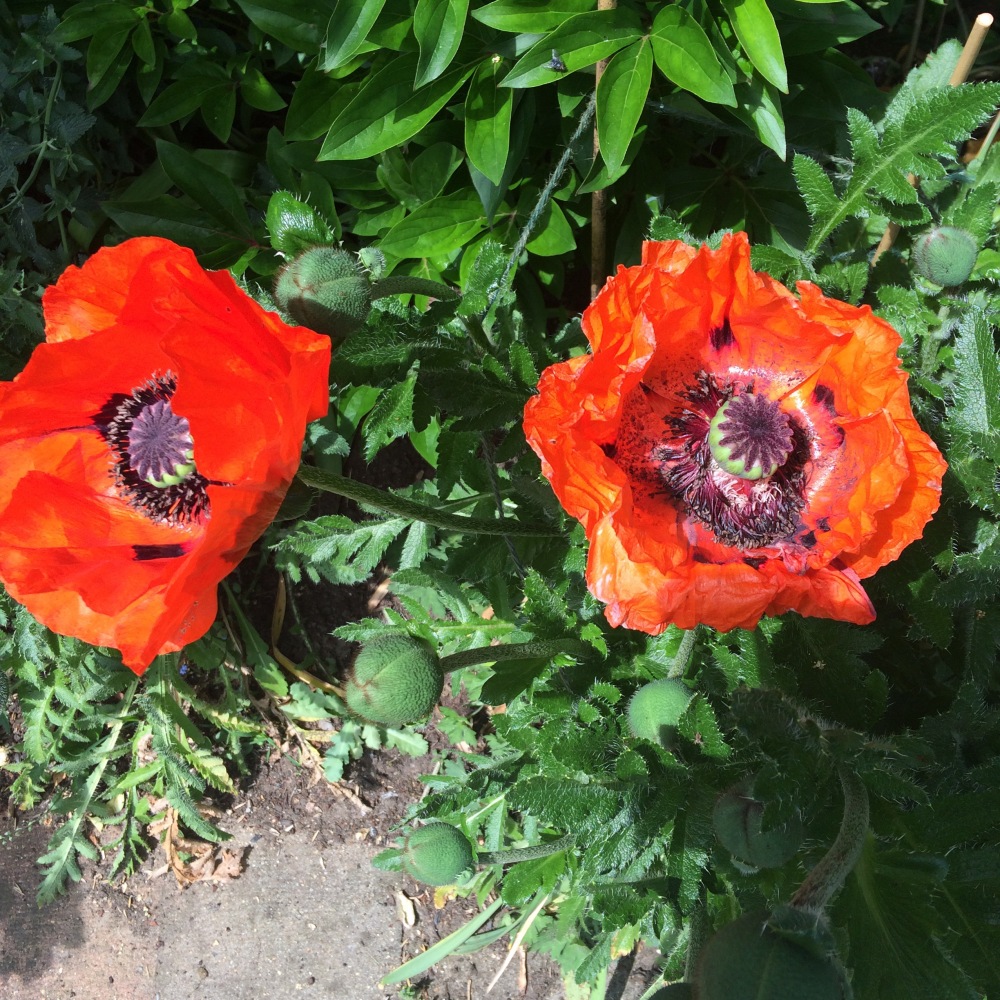 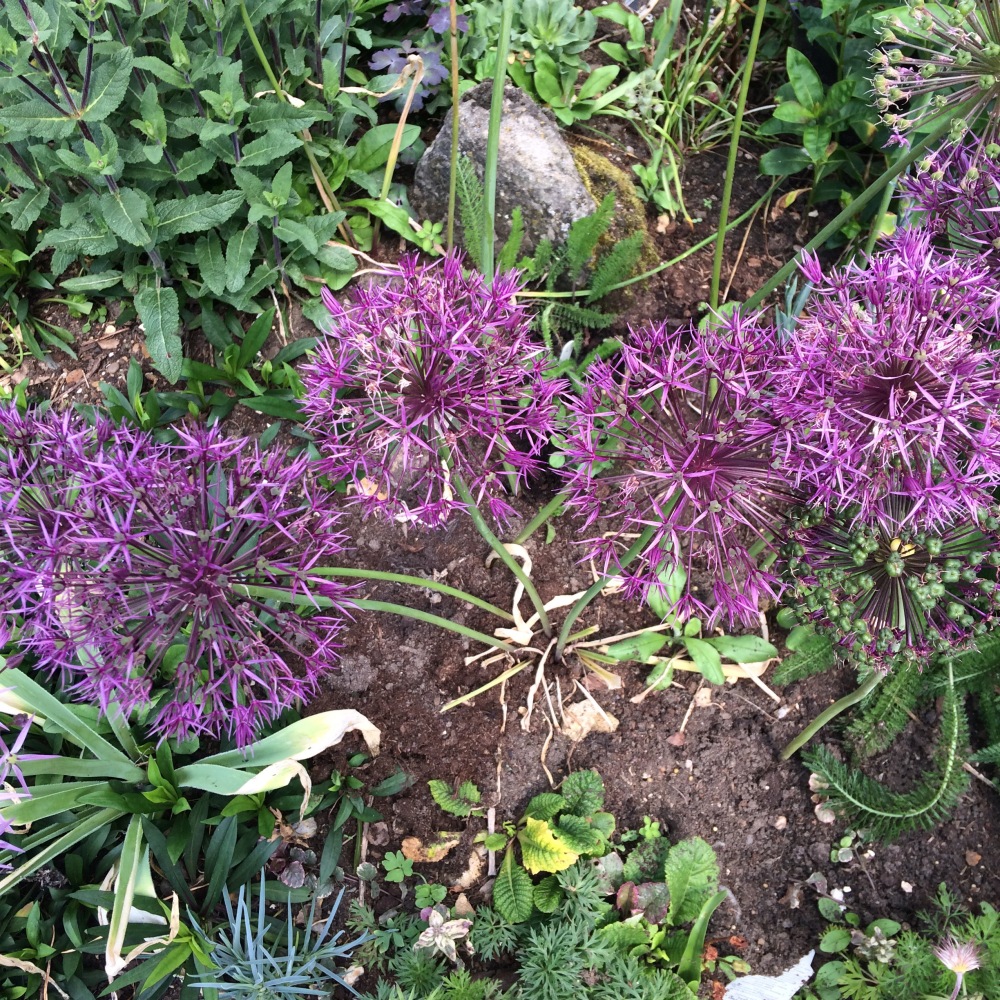 Do all my weights at the gym and walk back and then Mum picks me up from flat with suitcase.

We have lunch in the garden.  Then I walk down to beautician for lash tint and walk back.  Now Mum is pottering about in the garden.

Have purchased a transparent cosmetic pouch for the aeroplane so need to transfer liquids into it.

So excited!  At 10.15am tomorrow plane lands and I will see New Chap who is meeting me at the airport.

The garden is filled with birdsong and it’s still warm enough to be sitting outside in shorts and a vest top.

Am up at 5am tomorrow so had better post this and have Early Night.

Happy Wednesday everyone!
*1972.  Song by The Kinks from the album Everybody’s In Show-Biz.  Written and produced by Ray Davies.

Achievements Of The Day:

Watch last night’s Grantchester this morning.  It’s so good.  As is The Durrells.  Urge you to catch both series on the ITV player…

Trainer is pleased with me this lunchtime: do four sets of all my weights and add a new machine which is the lat pull down one.

Watch Inside Windsor Castle whilst eating my lunch.  It’s an episode following the 1940s and early 1950s. Am really enjoying the series.  Will watch the next episode later.

Then do Body Scan Meditation but can’t sleep: think am getting anxious about packing.  After have posted this will heave suitcase out from under bed and place it on the bed in the spare room.  Then can start putting stuff inside it.

It’s a beautiful sunny day and even take off sweater on walk home from gym and put on some shorts at the flat.  Show you:

Am drinking coffee, listening to The Kinks and thinking about Packing.

Happy Monday everyone!
*1967.  Single by The Kinks.  Written and produced by Ray Davies.  Appears on the album Something Else By The Kinks.